Everything was decided in the last quarter of 2015. And finally on 29th January, Ayanti and I got married on a not-so-cold winter evening. The journey that started 5 years ago at an Anime club meetup (Yeah!), evolved to it’s next stage. Got some photos on Flickr to share with you all. :) 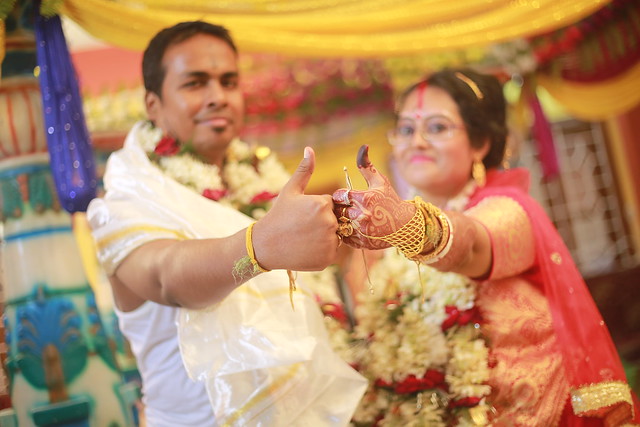 Quiet month roaming around Kolkata and nearby areas. Visited Dakshineshwar and Mayapur. Had my first heat stroke. Didn’t drink enough water on a hot day, then stood under the sun for couple of hours and that did it. One moment I was seeing yellow grid lines, next moment I’m on the ground with Ayanti and mom pouring water on my head. It was an interesting experience though. Hopefully wont happen again.

Another significant month. Ayanti and me finally move to Bangalore. We move into our tiny one room apartment on the roof in Murugeshpalya. Roamed around the city. The malls and restaurants specifically. We love to eat, and Bangalore has plethora of food options. So it was fun. :)

Next we thought of travelling somewhere. So one fine day, took a bus and headed for Yercaud, Tamil Nadu. It’s a small town on top of a hill. We took a KSRTC Airavat bus to Salem, then a local bus to Yercaud. Salem was bloody hot! But as we climbed the 20 hairpin bend to the top of the hill, the weather became much more pleasant. Our hotel room was on first floor and we could see the clear sky and the Yercaud lake from the balcony. It was a lovely experience.

Yercaud is a nice place to spend couple of days. The lake, Dear park, Rose Garden, Lady’s seat, Gent’s Seat, Children’s seat. The view from the top was mesmerizing.

I got an interview call from a privacy concerned company in Munich. And they only offered to fund for a day. So I prepared for a trip to Munich for a day! After some major moving around for documents and several hours of waiting at VFS, got a Schengen visa for 3 days(!). It was a 3 hour flight to Muscat from Bangalore and then a 7 hour flight to Munich from there. I reached Munich at around 7PM and it was still sunny! Took a subway to the city and checked into the hotel. It was about 8:30PM and the sky was still lit. That was a funny experience. But the night came so much rapidly to make up for it.

Met Konark, had dinner. And went to sleep. Next morning headed for the interview. Which didn’t go very well and I failed it, but learned some valuable lessons in the process, which is shaping my life right now as I write this blog post. So overall, it was a good experience.

Then I had about 6 hours in hand, before my return flight. So roamed around Munich, with my backpack and a handbag. Took several subway rides. Walked around for couple of hours. At the end of which I wished I could drop on the street and sleep a little. But I had to come back. So headed for airport. Then another 2 hours in checking in and waiting for the flight. My flight was at 10PM and my visa was valid till 12 midnight. So that was pretty exciting few hours.

Loved the chocolate collections at the duty free stores!

After about 10 days, we decided to take a trip to Goa. Not the tourist infested Goa. We chose Palolem, south Goa which is much more quiet and secluded. And it was almost the beginning of rainy season, so almost no crowd there. Took a bus to Canacona and then auto to hotel. Spent some lovely days there. The sea, mountains, scooter ride on a quiet road. And some good food. It was a perfect trip. Except, right before coming back, Ayanti fell down and injured her leg. We just considered the wound a souvenir and moved on.

More hopping around the city and eating more delicious food. Then in 3rd week we visited Kolkata to attend my niece’s first birthday! She grew up so fast! I couldn’t miss it!

We moved to a new place. Out of my one room flat, to a 1BHK in the same area. On the roof, so we have a whole roof to ourselves and a new view of the sky.

Active month for us. I bought my first cycle, a BTWIN MyBike 7S from Decathlon. And Ayanti joined her Zumba class. I also started going to weekly rides with Sathya.

Then we visited the Shivanasamudram Falls with Sathya and Jo. That was a fine day.

The month of JSFoo and MetaRefresh. They are 2 tech events on Javascript and UI/UX by HasGeek. I was asked to volunteer in these events as a photographer, because I like photographs, and the usual photographer was not present. Result -

Near the end of the month, by office laptop’s one hinge and CPU fan busted. So I was desperately looking for a new laptop. And after a lot of drama on ecom websites, I got myself a used ThinkPad T430, which came with 4GB(2+2) RAM and 320GB HDD. Then bought an 8GB RAM. Then installed both the RAM and the SSD from the other laptop in it. Now I can’t even feel that it has an old proccy. Owning a ThinkPad was a dream for me for a long time. But from the states of current TPs and their price tags, I think I did good buying an old model. (Guess what, this one also has an optical drive (which doesn’t work) but I can install a caddy in place of it ;D)

Durga Puja month! We could not visit Kolkata because of the tremendously high air ticket prices. So we decided to roam around Bangalore and find all the good pujas, which turned out pretty well. I made a small video out of it -

Next big thing that happened this month is that my parents visited us! This was mom’s first time travelling in air, and dad’s first time after around 30 years. And they definitely had fun. :D

Then to avoid Diwali noise and pollution, we decided to travel to Mysore. Spent 3 days there in an AirBnB, which was a farm house, away from all the crowd, among the nature, and parents just loved it.

Back to city. Started the month with my first cycle rally. It was for 30km. My longest distance before it was 16km. So this was almost at the edge of overdoing it. But somehow completed it. Took every bit of strength I had and felt like just lie down on the road after it was done. This is what it looked like -

Attended Comic Con. This was Ayanti’s first comic con, so was real fun. We both love animes and cartoons. So it was kind of a big deal for us. :)

The month ended with our first train journey. We travelled to Kovalam from Bangalore. Instead of booking a hotel, we carried a tent that I got from Kiran. It was also our first time ever to stay in a tent. That was a nice experience.

Kovalam beaches were fine. The only thing that sucked is that thanks to the recent demonitization, all the food places were only accepting cash and the ATMs weren’t really working. That was a very bad experience.

From Kovalam we took a train to Kozhikode and spent 2 nights there. Learned that it’s not a touristy place and the beach is very dirty. But those negatives got overshadowed very fast by the fact that the food there is amazing. We did nothing but eat at different places for those 2 days.

While coming back, saw that a train ride will take some 12-15 hours and take a huge detour via Coimbatore. But saw on map that Bangalore is not much far if you take a bus and ride via Wayanad. So we booked a bus from Kozhikode to Mysore via Wayanad. And passed Wayanad around evening. The view from the bus was simply mesmerizing. I didn’t take a photo because I could not look away from that view of lines after lines of mountains covered in mist. We’ll surely visit Wayanad again to answer the call of the mountains.

From Mysore, got a bus to Bangalore within 5 minutes. Had a good dinner at Majestic, came home and slept.

Professionally, didn’t progress much in 2016. Had to cope up with a lot of difficulties in personal life which distracted me severely from my work, or maybe I let it distract me. I’m still figuring out the answer. And the development in last couple of weeks has brought me to a much better place. Hoping things will get better and I’ll be able to be active socially and professionally again.

Want to attend more meetups. Want to organize some events too. Want to learn a lot. Want to meet more people and try to deal with my anxiety issues. Want to help people in need. Want to share knowledge. Want to travel more. Want to see snow if possible. Want to go trekking and camp under the stars. Want to do things I’ve never done before. Want to get closer to the meaning of my life.