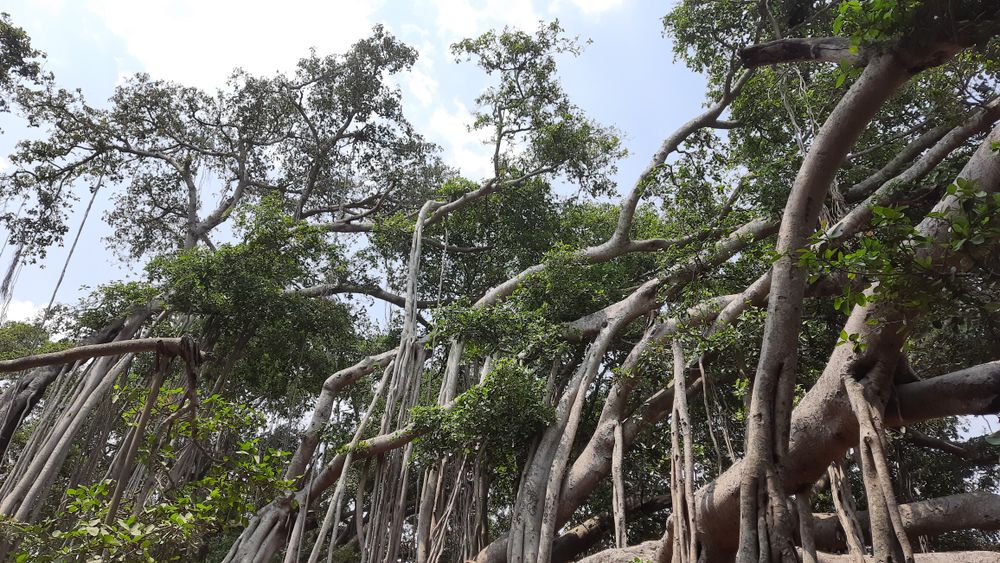 March 18-19-20 was a long weekend. While couldn't go somewhere out of town for couple of days, because we already had some other plans, we decided to go for a day trip. None of us ever visited Dodda Alada Mara. And it's not that far. So decided to go there. Sounava decided to join us in his newly bought car.

Initially our plan was to not stop anywhere for too long, have quick lunch and touch these 4 points in blue marker towards Magadi road.

We just wanted to drive past the dams and Savandurga hill, and not spend much time anywhere. But of course plan changed.

First we reached Dodda alada mara and found that it's not a big place and there isn't much to see. But it's a fascinating piece of history though. The tree was planted roughly around when Shah Jahan was ruling in Delhi, and when Taj Mahal was built. Tipu Sultan was yet to born. Almost all of south India was under the Wodeyar kingdom.

But unfortunately the original root of the tree no longer exists as it died of natural illness few years back. The whole tree right now is standing on the hundreds of aerial roots. There is some sort of philosophical point here somewhere.

We spent some 15 minutes there. Took some photos. And by the time we're done, it was almost lunch time. So we decided to head for this place called Ranch, at Big Banyan Vineyard & Resort, which was barely 1km further down the road from Dodda alada mara. The photos we saw of the place looked good and it had good rating, so we decided to head there.

For some reason they only had buffet that day for lunch. It was Rs 1500+tax, which was a bit steep, but we decided to go for it because we liked the ambience and environment, and going around to find another place to eat will surely cost us time and effort.

They also had an alcohol buffet for 2500+tax. We're not big on drinking, so avoided that. Mentioning it here if anyone wants to go get wasted.

The buffet was massive. There was live counters outside for pasta and BBQ. We took some meat from there. Took a bit more than we should have, which we realized later when we visited the main food section.

The buffet line was like 30 feet of different dishes on both sides. And to our good fortune, the food was good. We really enjoyed the meal. We also took a bottle of Rosé from the Big Banyan vineyard itself, and we really liked that as well. So much that I bought a bottle of that after coming back home and that bottle is close to it's end.

We entered that place at 1:40PM and left at 4:20PM. We could have left earlier, but we really wanted to avoid the sun and enjoy the food. Plus I wanted to digest the tiny amount of Rosé I had.

After that we saw that we had just enough time left to go visit Manchanabele dam, and couldn't visit the other 2 places. We decided to just do that. So we headed for the dam. It was a winding road through some villages. We saw the massive antenna of the Indian Deep Space Network (IDSN). It was a sight to behold.

The best part is right when you take the turn and reach this exact location - https://goo.gl/maps/zP625y7QiW9PBoSh8

The view of the dam from that point just blew our mind. It cannot be expressed even in photos/videos. You have to go and see it yourself. The road suddenly moves downhill and the dam becomes visible, almost as if like you're going to drive straight down to the water. 🤯

The dam's official entrance was closed for public due to COVID. There were side paths that you could walk and climb to get on top of the dam, but we decided against that as it was getting late. Suddenly some cloud showed up and essentially sun had set an hour and a half early. We didn't want to drive much longer on NICE road in dark. So we headed out.

I thought the day had ended but we still had some experience left to be had. We had to get on the NICE road from Mysore road junction. And the traffic there was nothing short of a rendition of Mad Max Fury Road. Almost got hit by a bus, a traveller minibus, and an old Santro Xing, all of who either happily avoided my indicator, or didn't care to look at their rear view mirrors before making turns. Important lesson I got that day. Going to avoid Mysore road-NICE road junction in the evening at all costs from now on.

It was another lazy daytrip of about 100km in total. I need to head for a 150km+ trip next time.

Get the latest posts delivered right to your inbox.

No results for your search, please try with something else.